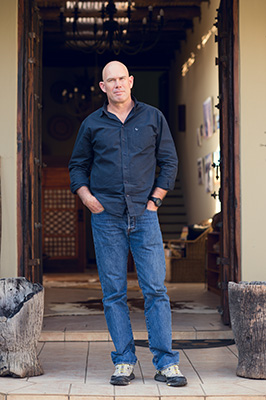 GG Alcock was born in Msinga, then one of the most poverty-stricken and violent parts of KwaZulu-Natal. GG’s activist parents, Neil and Creina Alcock, raised their two sons in a mud hut with no running water, electricity or modern conveniences and they grew up like young Zulu boys, herding goats and hunting small animals. Zulu reared and bred, the boys learnt the essence of how to survive in a harsh world – valuable skills that have undoubtedly contributed to GG’s success as an entrepreneur.

GG has been at times a shebeen owner, political activist, community worker and African adventurer. Fluent in Zulu and conversant in most South African ethnic languages, GG was the founder of Minanawe Marketing, a leading activations business in the kasi sector.

GG’s first book Third World Child: Born White, Zulu Bred tells his story and that of many of his people – a literary journey of a third world tribal society learning to embrace the first world of the twentieth century.

GG’s second book KasiNomics: African Informal Economies and the People Who Inhabit Them casts a light on the invisible matrix at the heart of South Africa’s informal economies and the people who live in them. KasiNomics takes you down those rural pathways – weave between claustrophobic mazes of shacks, browse a muti market, attend a spirit returning ceremony and save money with gogo in a stokvel, among many more people and places.

His third book KasiNomic Revolution: The Rise of African Informal Economies is about the lessons of marketing, distribution, culture and modernity in an informal African world.

GG is a regular speaker on a range of topics – from business to motivational to trend talks on subjects including entrepreneurship, the informal market, diversity and culture, marketing communications to the mass market and the route to market strategies for the informal sector.